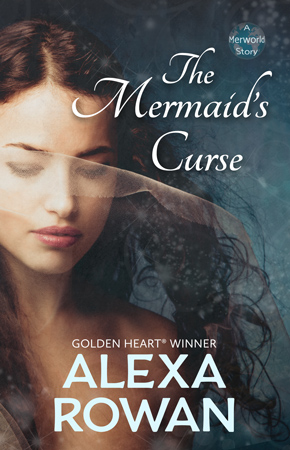 As a young mer in the palace guard, Lou gave his heart to Princess Kyria. But her stepmother, the reigning queen, caught them together and banished him. Now he’s cursed to wander the drylands until he finds his true love—his soul mate. And after three centuries, he’s still waiting.

Then he meets a human woman who shares his long lost love’s face and name. Will Lou let himself fall for his perfect match, when he could lose her forever if she loves him back?

The Mermaid’s Curse is a short story of 7,800 words available exclusively on Amazon. And with Kindle Matchbook, if you buy the print book, you can get the ebook for free!
Buy the ebook (or read in Kindle Unlimited) | Buy the mini-book (print)

“Tina,” Lou barked, “we need to get ready for today’s class. Give me the rundown.” He hefted two large plastic bins overflowing with brightly colored fabric mermaid tails, one under each arm. Jerking his chin, he urged his business partner to accompany him.

Joining him on the path to the beach, Tina adjusted a colorful sarong around her bikini-clad hips. She consulted her clipboard as they walked. “We’ve got one expert swimmer, three intermediate, two beginners. All women.”

A few years ago, Tina had somehow suckered him into becoming both majority owner and lead instructor of her brainchild, The Mermaid School. They worked well together, and it was easy money—he and Tina supplied the flamboyant mermaid tails, and tourists visiting their southeast Asian beach town paid handsomely for a day of instruction, capped by a photo op.

But Lou had to bite his tongue every time the “mermaids” (and occasional “mermen”) posed for their photos lolling on the rocks near the shoreline, or on their bellies at the edge of the sea, tails flopping in the air. The staged shots weren’t remotely accurate. Mers rarely ventured above the surface, preferring deeper waters where food was plentiful and human interactions almost unheard of.

He ought to know. He used to be one.

As a young mer in the palace guard, Lou had fallen in love with Queen Akantha’s stepdaughter, Princess Kyria, and she with him. One day, he’d foolishly allowed the princess to entice him up to her rooms. Discovering them mid-kiss, the Queen had immediately banished him, cursing him to wander the drylands until he found his true love, his soul mate.

Lou might appear to be in his early thirties, with curling jet-black hair, a neatly-trimmed beard, and a tanned, muscular body. But his dark eyes reflected three bleak centuries of keeping love at bay, after the true nature of his curse had become apparent to him. He’d spent many a long night pondering whether the Queen had known the form her curse would take when she’d uttered it, or whether the consequences of her casual cruelty had been unintentional, if not necessarily unwelcome.

In the end, it didn’t matter. He pressed on. What was the alternative?

Five of today’s students had gathered on the beach. Tina greeted them, making small talk while everyone awaited the late arrival. Tina was the people-person of their business venture and was constantly after him to be friendlier. Most days, he just didn’t have it in him.

Lou nodded at the women, then turned aside to plunk his bins down in the palm-shaded area where he and Tina always started their classes. He busied himself laying out towels and tails on the powdery sand, ignoring the excited chatter surrounding him.

A breathless, girlish voice caught his attention, and he glanced up at a petite woman standing at the edge of the group.

Lou gasped, a shockwave of recognition crashing over him. The woman’s eyes were the lustrous blue-green of a Tahitian pearl, a shade he hadn’t seen in three hundred years, yet remembered as vividly as if it were yesterday. Her warm brown hair cascaded down her shoulders and back.

Every hair on his body stood on end—a sensation that still perturbed him, even after existing so unfathomably long as a human. She was Kyria. Yet, not.

Heart pounding erratically, Lou catalogued every detail, every difference. The Kyria of his memories was eternally seventeen; this woman appeared to be only a few years younger than he did.

Though he supposed that made sense. Even if time moved differently in the human world, as it seemed to, Princess Kyria probably looked very much like the woman standing in front of him—if the princess had been human.

He swallowed the harsh lump in his throat. Princess Kyria—or Queen Kyria, by now—was undoubtedly at the palace, bound to her soul mate years ago and sickeningly happy with a smart, lovely daughter or strong, handsome son to carry on the royal line.

There was no way this woman could be her. Best to accept that and just get on with the class.

Tina sat the students down in a circle and took everyone through the usual round of introductions—who they were, why they were there. Their words washed over him like surf churning the sand into static. His entire focus narrowed to the woman who couldn’t possibly be his long-lost love.

Her eyes locked on his. He couldn’t look away.

“I’m here because…I felt…compelled to be here.” Her voice was warm and melodious, just like he remembered it.

Lou swallowed against a dry throat. “Your name?” he managed to ask, not entirely sure he wanted to hear her answer.

His world upended, then dizzyingly righted itself. His already-racing heartbeat quickened, and the air thinned until he was gasping for breath.

It was a coincidence almost beyond credibility.

Tina gently grasped his shoulder, bringing him back to the brightness of the sun sailing across a clear blue sky, the rhythmic shushing of wavelets in the cove. “You okay?” she murmured. “I’ve never seen you so pale.”

“I’ll be alright,” he assured her, though his hands trembled. Then he slowly faced Kyria, shaking his head. “I’m sorry. You just remind me of someone I…used to know. It’s a bit of a shock.”

An understatement—his legs would’ve buckled if he’d been standing up.

The smile-lines at the corners of Kyria’s eyes crinkled. “It’s funny, but I feel like I know you, too. Even though that’s impossible, of course, since we only just met.” And she laughed, a carefree, joyous sound he’d so rarely been able to coax from the princess in the dark years following the devastating loss of her mother; the too-hasty remarriage of her father, King Aleixo, to the grasping and high-handed Queen Akantha; and the King’s subsequent death a few years after Akantha had borne him another daughter.

A shiver wormed its way up Lou’s spine, chilling him despite the balmy breeze drifting across the heated sand.

With one last concerned look at him, Tina clapped her hands, drawing the group’s attention. “Okay, mermaids.” She grinned at them, gesturing. “Small tails are on my left, large tails on my right. After you each choose a tail that suits your personality, we’ll start off in the shallow water and just get used to them. Then we’ll split into two groups. Lou will take the more advanced group, and…” Tina glanced at her clipboard. “Becky, Gwen, you’ll be with me.”

Lou knew he wouldn’t be able to concentrate anywhere near Kyria’s vicinity. She dredged up too many long-buried emotions. And he wasn’t about to let a student drown or get injured due to his inattention.

“Tina. Mind if we switch today?” he asked.

The two novice swimmers’ faces lit with hope. As if he were choosing them, not simply escaping Kyria’s unnerving presence.

Tina frowned, and Lou knew why. She had the patience and tact necessary to instruct beginners, while he had the stamina to lead stronger swimmers farther from shore and handle any problems that might arise.

He offered a compromise. “Just for the morning?”

Maybe by lunchtime he’d be accustomed to Princess Kyria’s doppelgänger, and his usual brusque confidence would return. Maybe by then he’d be able to look at her exquisite face without anguish slicing through his soul.

He sighed inaudibly with relief.

The students selected their tails, stretchy fabric that would cover them from waist to toe, ending in flukes similar to a whale’s tail. Kyria unerringly went for the turquoise one with pale green and gold accents. It had always reminded him of a brightly-colored version of the princess’s lovely tail.

He turned away, avoiding the lurid imitation of a long-ago reality.

Lou’s own tail was much harder-wearing silicone. Deep brownish-grey with silvery blue highlights and realistic scales and flukes, it had been custom-made to his specifications. When he swam in it, he looked almost like he had as a mer. Before Princess Kyria had lured him into the mistake that had cost him everything.

Everyone carried their tails to the hard-packed sand at the tide’s edge, then Lou and Tina waded out and slid into their silicone tails underwater. The routine calmed him, as did being in the ocean, even as it underscored his profound loss.

Tina was saying, “Now, everyone watch Lou. He’ll demonstrate the proper stroke to use when you’re swimming with your tail.”

That was his cue. With a flip of his tail, he dove under an oncoming wave, popping up on the far side. Then, turning parallel to the beach, he undulated gently through the shallows where the class could see him clearly. He somersaulted underwater before swiftly propelling himself back to the group using a butterfly stroke.

Tina arched a dark blonde brow at him. He didn’t normally show off like that. But today was about as far from normal as it could get.

She clapped her hands again. “All right, mermaids, let’s get those tails wet!”

Their six students scooted and shuffled into the water. Kyria managed it more gracefully than the rest combined. But when an incoming wave knocked her off balance, Lou was there, bracing her against his side.

She clutched his waist to avoid getting swept off her feet. Seared by the unexpected contact with her sun-warmed skin, he inhaled a harsh breath.

Kyria jerked her hands back as if she’d been burned, and he immediately missed her touch. “Are you okay?” she asked. “Did I hurt you?”

To any other student, he’d have offered his hand and towed her out to the group. To Kyria, he offered his back. Right now, his feelings were as transparent as water. Shock. Desire. Grief. A bitterness that had faded, but never quite disappeared.

His emotions’ depths would scare her. They certainly scared the hell out of him.

“Come on,” he said, tossing the words curtly over his shoulder. “You need to join the others.” Then, like the shyest mer-child, he fled into the sea’s embrace before she could reply.